The Department of Labor finalized a new regulation for association health plans (AHPs) in mid-2018 that made it easier for small employers to band together to offer lower cost “large company” health insurance. However, the regulation itself has a progressive implementation schedule, starting in September 2018 and continuing through April of 2019, with its applicability based on whether an association was new or old and whether its benefits were self-funded or provided through a third-party insurance company. Based on press announcements and news articles, this study found 34 new association health plans that were recently launched. While additional new AHPs were also identified in the process of research, they were excluded if information was available indicating that the AHP operated under the old association health plan regulation[i] (which is still an option) as opposed to the new regulation from 2018.

Not all of the 34 AHPs studied were active at the time of analysis. Six of the plans were announced but the details were not finalized and the plans were not available on the market. The statistics in the report pertain to the remaining 28 plans except in instances where the planned AHPs are explicitly mentioned.

Associations are the foundation of AHP insurance. They allow businesses to band together according to either a regional commonality or a professional commonality. In a regional association, the businesses belonging to the association can work in very different professions but they all have to be located in the same geography (such as a county). The largest region allowed by the new regulation is a state.[ii] Professional associations, in contrast, limit association membership to employers in the same line of work or trade. The line of work may be broadly defined, such as the agriculture industry, or narrowly defined, such as cloud-based data storage vendors.

As a measure to discourage fraud and abuse, the new regulations on AHPs limit association scope to a geography or profession and also prohibit third parties such as insurers and healthcare providers from controlling an association because of the latter’s innate financial conflicts of interest. Each of the two approved commonalities has its own advantages with respect to association membership. For example, a professional association may have:

A regional association, on the other hand, may have:

Association health benefits can be fully insured, where the obligation to pay medical claims is transferred to a third-party insurance company (e.g. a Blue Cross Blue Shield entity) or the obligation can be retained by the association. In this second scenario, the health plan would be considered “self-funded.” There are pros and cons to each model. In the fully-insured model, the association has greater financial protection against insolvency because the financial risk of future medical claims is held by the insurer and not the association. However, in this model the association is also paying the insurer a profit margin alongside its contribution to claim expenses. Additionally, fully-insured plans face a sales tax on health insurance premiums.[vii]  Self-insured plans avoid the health insurance tax as well as the payment of third-party insurance company profit, although they still pay for some level of profit to service vendors that assist with the operation of the health plan. Self-insured plans also protect themselves from catastrophic medical claim costs through the purchase of stop-loss insurance that only pays the health plan in instances when claims rise above a predetermined threshold.

With respect to active new association health plans, 86 percent are fully insured. Six additional announcements of plans for new AHPs (that have not been implemented or released yet) also seem to be biased toward fully-insured plans given statements of intent to work with insurance companies or the use of third-party facilitators that use a fully-insured model.

Only 4 of the 28 active plans are self-funded. However, there are multiple factors that have likely influenced the low representation of self-funded AHPs. First, the new regulation does not allow self-funded plans to enter the market under the new rules until January 1, 2019 for existing associations and April 1, 2019 for new associations. In contrast, fully-insured plans could operate under the new rules beginning September 1, 2018.[viii] The second factor that likely accounts for the lower representation of self-funded plans within the first wave of new AHPs is that self-funded plans require greater planning and implementation effort. An association pursuing a self-funded AHP has to decide what functions it will directly supervise (e.g. marketing) versus what functions it will outsource to a vendor (e.g. medical claims processing).

Half of AHPs also offered at least one medical savings account option. Given that some of the AHPs used an insurer who commonly offers HSA options, the actual percentage may be higher. However, if no explicit reference to a medical savings account offering was available, it was not counted. A medical savings account is a tax-exempt financial account for use with approved medical expenses. A medical expense account may be a Health Savings Account (HSA) where contributions come from an individual for his or her own use or it may be a Health Reimbursement Account (HRA) where an employer makes contributions to employee accounts.

AHP benefit breadth has been one of the biggest concerns among detractors of association-based insurance. While large group AHPs do have benefit mandates (e.g. preventive care, maternity care), they still retain flexibility on benefit design in contrast to exchange plans that must include 10 standardized benefit categories (known as the “Essential Health Benefits”).

Despite the benefit flexibility afforded to AHPs, there is not evidence of narrow benefit designs proliferating in the AHP market. Plans that have their plan benefits[ix] online regularly include coverage of doctor and specialist visits, hospitalization, emergency care, prescription drug coverage, maternity coverage, preventive care, and mental health care. UnitedHealthcare, which is the most popular insurer for fully-insured AHPs, has stated that it “does not offer ‘skinny’ plans, in which significant benefit categories (e.g., maternity, hospital, Rx) are excluded from coverage.”[x] Several plans made representations of compliance with Affordable Care Act benefit requirements.[xi]  In fact, one AHP claims to have superior benefits to Affordable Care Act coverage.[xii] Regarding noticeable misalignments with Affordable Care Act benefits and some AHPs, a lack of coverage was observed multiple times for pediatric dental care and pediatric vision care.[xiii] In large group health insurance, these benefits are not mandated and may be offered through stand-alone dental and vision plans.[xiv]

Sam Baker, healthcare editor at Axios, has commented that when the new AHP regulation came out, “Experts told me at the time that they thought short-term plans were a much bigger threat to the ACA and would be more likely to offer skimpier benefits.”[xv]

The central value proposition of the new association health plans is improved savings over the health insurance alternatives traditionally available to small businesses and sole proprietors. For all AHPs, the foremost basis for savings is increased scale of plan participants which, in turn, improves negotiation leverage with insurers and healthcare providers alike. For fully-insured AHPs, their status as a large group health plan also requires them to spend a smaller percentage of premiums on administration and other overhead costs than is the case for small group and individual health plans (15 percent versus 20 percent).[xvi] For self-funded AHPs, additional savings can be realized through not paying profit to a third-party insurance company, exemption from the tax on health insurance premiums, and lowering claim costs through optimization tactics based on a direct analysis of their own medical claims (the data on which is typically not accessible for employers within fully-insured plans).

Not surprisingly, maximum savings claims average higher among self-funded AHPs (29 percent) than for fully-insured AHPs (23 percent). It should be noted that savings claims are relative to a business’ current non-AHP plan. Thus, premiums can vary by business within an AHP particularly if the sponsoring organization represents very different types of businesses within a single association (e.g. a regional AHP) since AHPs can charge different premiums based on industry and occupation.

New association health plans were observed in 13 states. As illustrated by the map below, the new AHPs cluster more towards the middle of the county than either coast. While proponents of AHPs have historically touted the benefits of health plans crossing state lines and increasing competition, only one new plan sponsor, Land O’Lakes, so far has AHP insurance that is available in multiple states (MN and NE).[xvii] Part of the reason for this situation, however, may be due to the fact that AHPs are subject to state law so a multi-state AHP needs to perform all the necessary filings and obtain appropriate department of insurance approvals in each state where it intends to offer health coverage. 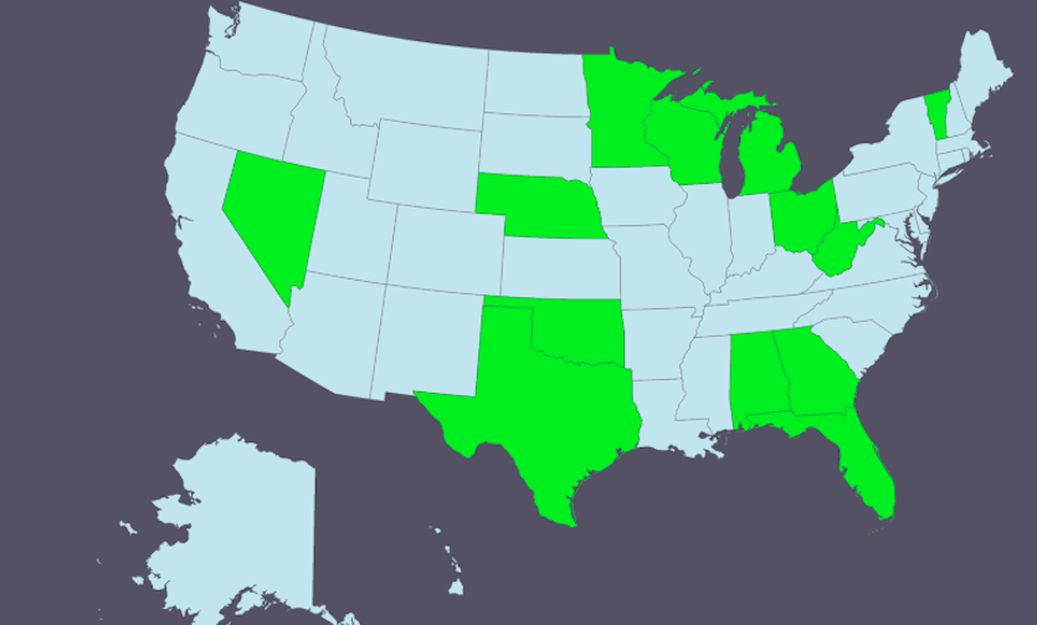 Associations are made up of groups of employers. The new regulation allows associations to include employers as small as sole proprietors and the self-employed, although they are not obligated to extend membership to employers that small.

Most (54 percent) new AHPs limit association membership to employers with 2 to 50 employees who are plan eligible.

Some plans (e.g. the Land O’Lakes AHP) did not have an upper limit on employer size.

The definition of the association, that is to say, its members’ shared regional or professional commonality, delimits the association’s potential size. Because the key element in the AHP savings strategy is leveraging participant scale, maximum association size is extremely important. Some of the new AHPs have offered descriptions of their total addressable markets, which illuminates the size of the markets being pursued by new AHPs. The below list provides examples of addressable markets for various new AHPs.

The analysis of the initial AHP offerings under the new association plan regulation has revealed a market with a trend towards fully-insured, regionally-based AHPs sponsored by chambers of commerce. Coverage for sole proprietors is currently a sizable minority of new AHPs, and it will likely grow after more AHPs demonstrate success with this market segment included.

While the fully-insured AHP segment is expected to continue to grow in coming years, self-funded plans should become a greater presence in the AHP market than they are now. Fully-insured plans had a head-start on their self-funded counterparts inasmuch as they were approved for market starting September 1, 2018. In contrast, self-funded AHPs for existing associations were approved to enter the market on January 1, 2019 while self-funded AHPs for new associations cannot enter the market until April 1, 2019. The greater size requirement for self-funded plans, as well as the greater implementation work and risk mitigation tactics, is expected to keep their growth rate slower than the quicker-to-implement fully-insured AHPs.

As the AHP market matures, we should also expect the number of multi-state professional associations to increase. Since they involve more preparation and state filings, they will take a longer period to implement in the market.

Given the affinity-basis of associations, it is likely the market will see more entrants with a philanthropic orientation (e.g. The Business Fund For Texas Children Battling Cancer) or an agenda to promote a community (e.g. the Latin Chamber of Commerce in Nevada). Given that the new AHP regulation requires them to have a secondary purpose separate from the provision of health benefits that would make the association a viable entity in the absence of health benefits, associations like the ones noted above may see an opportunity to grow their membership by combining their social mission with the attraction of lower cost health insurance.

Kev Coleman is a widely recognized authority on American health insurance markets and is also the President of AssociationHealthPlans.com. Press inquiries regarding this report can be directed to Mr. Coleman at media@afmcommunications.com. Data from the report may be cited with proper attribution. © Kevin Coleman.